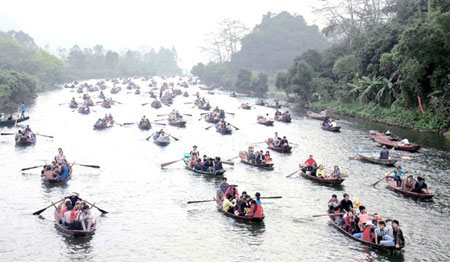 Starting on the sixth day of the lunar January month, which falls on February 5, the Perfume Pagoda Festival is celebrated for three months, from the first to third lunar month of each year.

Instead of stop-over at the Giai Oan Temple, the cable car route will run directly to the main Huong Tich Pagoda.

Other changes include paper tickets being replaced with swipe cards and a new 19-entry toll booth.

Around 5,000 boats have been granted licences to operate on the Yen Stream, in addition to 14 large-scale restaurants able to serve up to 60,000 people, have also been established.

A joint force of policemen and local security staff will be on hand to manage traffic conditions and bolster security efforts at the festival, frequented by pickpockets and scammers.

In addition to the three current entrances, the organisation board has added a new entrance on Hang Vo Street to help visitors access the site.

The My Duc District authorities where the Huong Pagoda is located, have also deployed around VND11 billion (US$520,000) to rebuild the current Hoi Xa entrance. 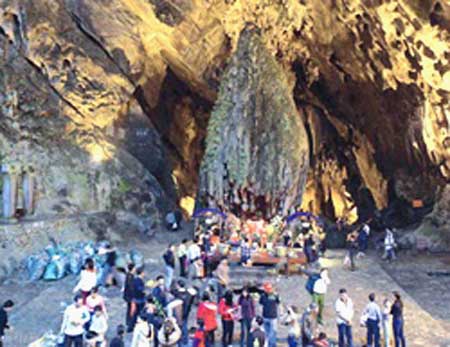 Deputy chairman of the My Duc District People’s Committee, Hau, said while they acknowledged public concern with the trading of wild animal meat within the site in recent years, it was difficult to eliminate the problem.

“It is due to the demand of visitors, who are vegetarians or Buddhists. However, that is not the meat from wild animal living in nature. Most of these animals come from the farms in neighbouring areas,” the authority said.

To boost food hygiene standards during the festival, all restaurants have been asked to display food in glass cabinets as well as standard counter fridges to store food. In addition, restaurant operators are prohibited from hanging animal meat in front of restaurants.

“To avoid getting scam, people should bargain before purchasing anything,” Hau suggested.

The Perfume Pagoda festival is considered the greatest Buddhist festival in the North of Viet Nam, playing an important role in the spiritual life of Vietnamese people and Vietnamese Buddhists in particular.

The festival takes place in Perfume Pagoda in Huong Son Commune, My Duc District, about 70 km from centre of Ha Noi to the south. The three-month-long festival will welcome hundreds of thousands visitors.